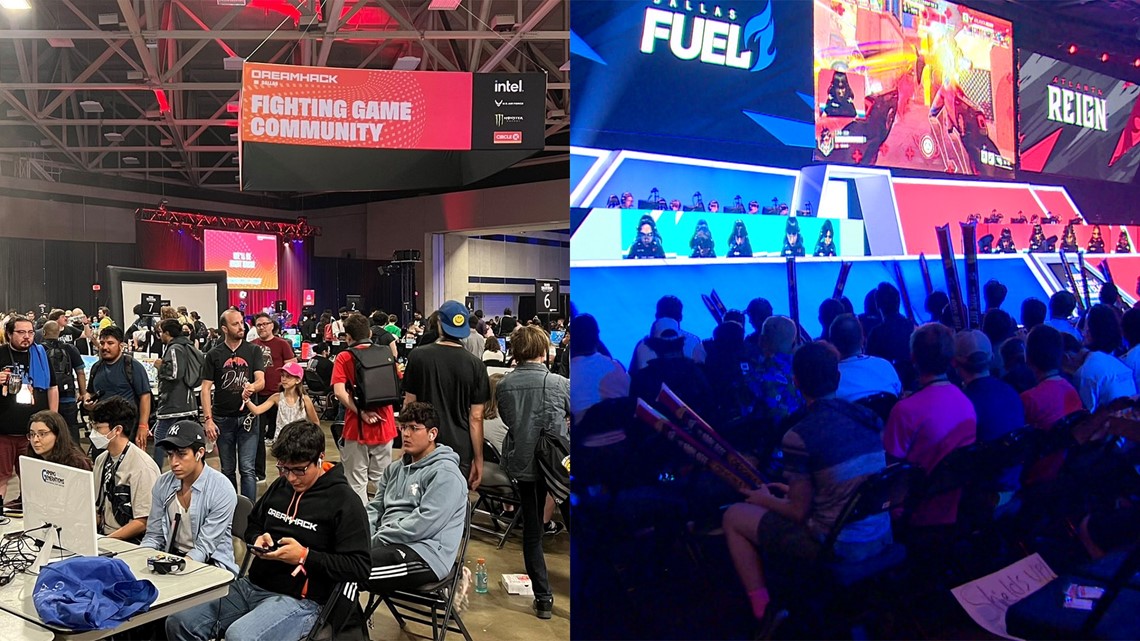 It was a big weekend for esports as tens of thousands descended on the DFW area for the DreamHack Gaming Festival and a massive Overwatch tournament.

DALLAS — For years, North Texas has proven itself to be a hub for esports and video games — and not just for the United States. The region is certainly attracting international attention.

If more proof is needed, look no further than this weekend.

Not one, but two major gaming events took place in the Dallas-Fort Worth Metroplex this weekend, drawing tens of thousands of fans to the area in celebration of video games and esports.

DreamHack, an international gaming brand that hosts festivals around the world, hosted its first event in Dallas for the first time in three years, and the excitement over the return of major in-person events was evident over the weekend. .

Crowds filled the Kay Bailey Hutchison Center as fans had plenty of options on their gaming plates, such as live competitive matches and rows of tables packed with consoles and PCs for attendees to play against each other others.

Organizers told WFAA that the event brought together more than 33,000 attendees from 50 states and 29 countries over three days.

Championship games from popular video games Rocket League and Counter-Strike: Global Offensive were featured at the convention, and fans got to cheer on their favorite teams.

Colleges from North America and Europe participated in a rocket league championship tournament at DreamHack. DFW was represented by the University of Texas at Arlington esports team.

With a brand so internationally known and having held its main events in Sweden and other countries, what brought DreamHack to Dallas? Shahin Zarrabi, vice president of strategy and growth at DreamHack, told WFAA that North Texas is perfect.

“Dallas loves games. There are so many players here, esports teams, organizations. We came here in 2019 for our first event in Dallas, coming from Austin before,” Zarrabi said. “Dallas showed us so much love, so it was a no-brainer for us to come back here.”

After having to navigate through the COVID-19 pandemic and having to cancel 2020 and 2021 events, Zarrabi said he’s glad DreamHack is back in Dallas and becoming something more than a simple esports event.

“We want to create a platform for everyone to come and connect, explore, be themselves. All gaming under one roof. It doesn’t mean you have to sit and play or watch someone else play,” Zarrabi told the WFAA. “You might be dressing up as someone in a video game…or meeting your favorite designers online.”

“We want to create this platform, this arena, for people to come and just be who they are and follow their passion,” he added.

And of course, the city of Dallas also sees the fruits of the great gaming festival.

According to Zarrabi, the 2019 event in Dallas generated around $3.6 million for the city.

“I hope Dallas loves us as much as we love them,” he said.

And, about 20 minutes west of the Dallas Convention Center, another major esports event was happening at the same time.

Overwatch, a popular first-person shooter, was the focus of this event as the game’s esports league held a $225,000 tournament – ​​the Overwatch League Kickoff Clash – at Esports Arlington Stadium.

The Dallas Fuel, a team owned by Dallas-based organization Envy Gaming, was the host city, as pro teams from across the country and thousands of fans descended on North Texas. This weekend’s tournament was the first major in-person event of 2022 for the Overwatch League.

Geoff Moore, president of Envy Gaming, told the WFAA that events like this are proof that the North Texas region is becoming a huge esports hub.

“It brings in a lot of people who love [Overwatch] from out of state Texas, other cities in Texas to Arlington and the Dallas-Fort Worth area,” Moore said. “It really fulfills the vision that the city of Arlington had when she invested in creating this venue that they were going to bring people from all over the country and even other countries to events like this depending on what those people really have a pent up demand to see live and to share with each other.”

Organizers told the WFAA that more than 4,000 fans attended the four-day event.

In March, Esports Stadium Arlington also hosted the first major event of 2022 for the Call of Duty League, where thousands of people cheered to sell-out crowds. Dallas-based OpTic Texas, part of Envy Gaming, won the grand prize at this event.

Organizers told the WFAA that about 75% of ticket buyers for this event came from outside the DFW area.